E and I recently took R to Disneyland. We had a great time and having been there and done that, here are our top tips for families considering the trip:

Where to stay when visiting Disneyland

We looked into staying on the Disneyland property but found that it was very expensive. I don’t think it’s necessary to spend the extra money since Anaheim has a number of more reasonably priced options that are close to the theme park and just as lovely.

We stayed at the  Anaheim Marriott. Our first room wasn’t great but the second room they gave us was fine for three days. It was a bit on the small side (especially when you add in a third bed), but we didn’t spend much time there so it was ok.

The facilities at the hotel are great. There is an extensive gym (because who doesn’t want to spend half an hour on the elliptical machine after spending the day running around Disneyland?) and a busy pool in the hotel courtyard. 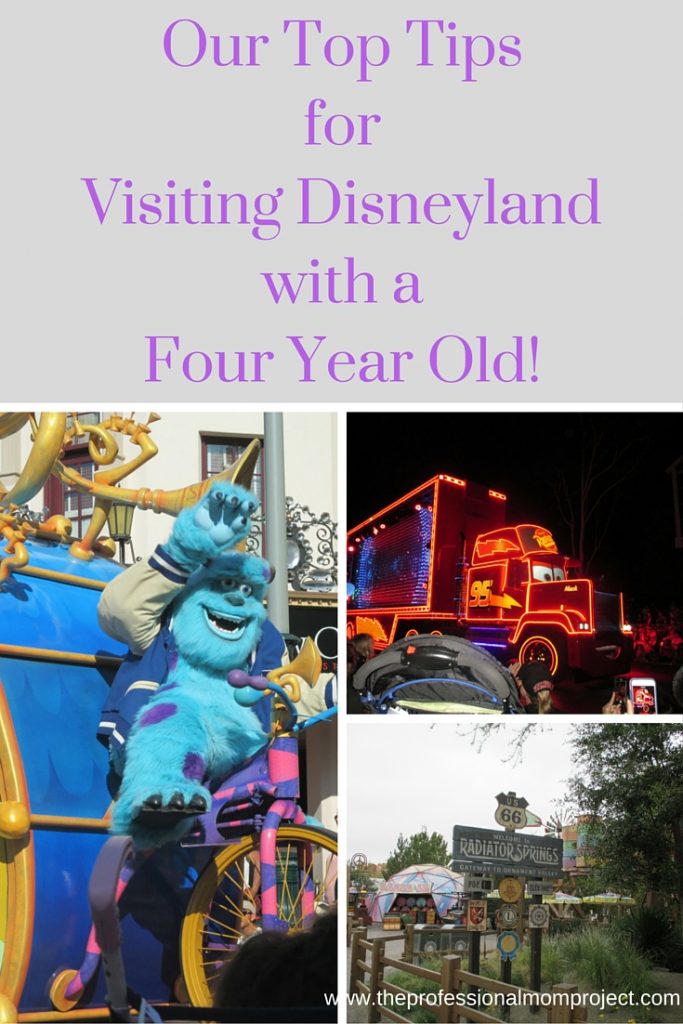 How to get to Disneyland

We rented a car in Los Angeles so we could drive to the park everyday and come and go as we pleased depending on how R was doing. After investigating a bit further, we realized that might not be the best way to go about it. We found out about ART – Anaheim Resort Transportation and decided to use this service instead.

There’s a stop right outside the Marriott and it is a very quick ride to the Disneyland gates. We bought a three day pass and it allowed us to go back and forth to the hotel as much as we wanted. The pass is $12 (US) per day per person and $3 (US) per day for each child (kids under 3 are free!). This is pretty reasonable since the Disney parking doesn’t allow in and out privileges and is pretty expensive.

Our first night there we decided to visit Downtown Disney for dinner. Downtown Disney offers free parking  and several dining options so we figured we’d check it out. DD is an outdoor mall with restaurants, a variety of shops and a busy atmosphere.

We had dinner at Uva Bar and Grill. Uva is right in the middle of the outdoor mall so there’s lots of stuff going on around you. The food was mediocre at best, but sitting outside on a beautiful night and watching the people go by was fun.

California Adventure During the Day

We started off by waiting at Radiator Springs Racers. In hindsight, I would suggest getting a Fastpass since the line was very long. It was a fun ride but R got scared when Frank the tractor pops out of the dark with his red eyes and smoke stacks. It was startling, but not scary per se. If your child is skittish or sensitive, you might want to tell him/her beforehand. 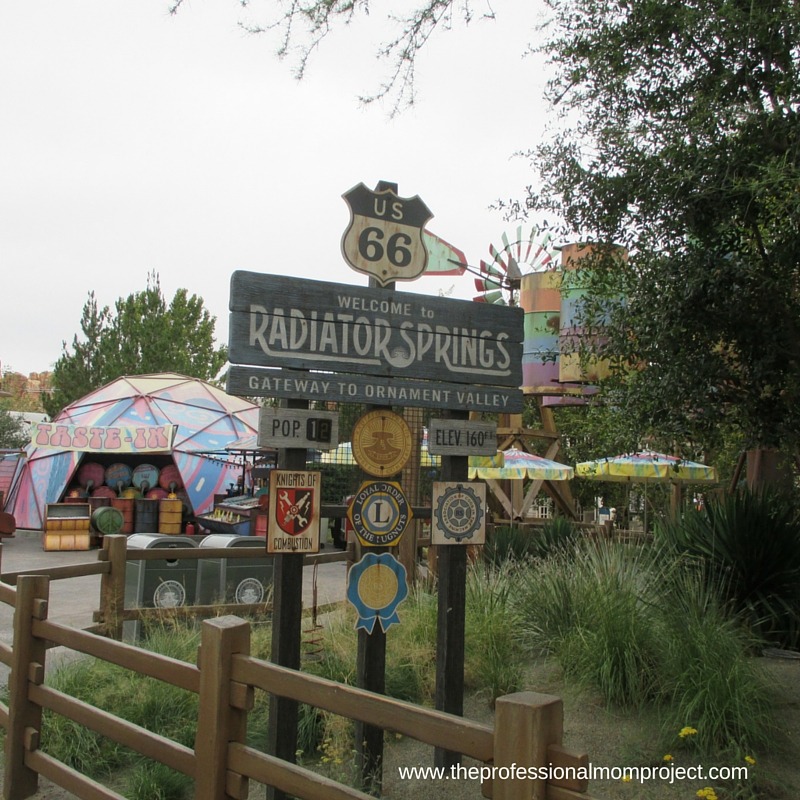 The rest of our day was spent walking around the seven different “lands” that make up California Adventure. Some of R’s favorite rides/attractions included: 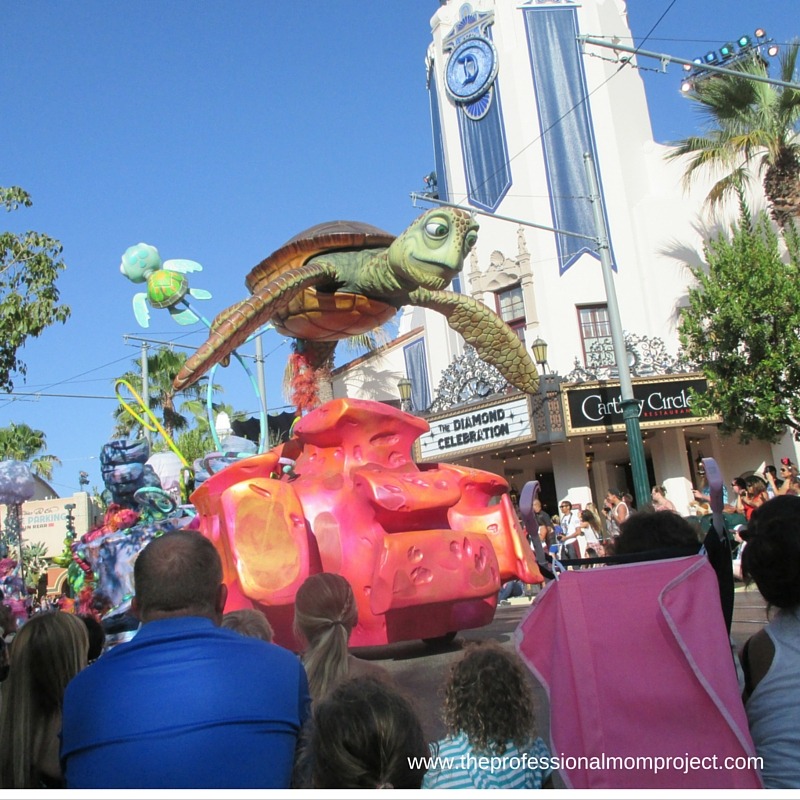 [Tweet “What are your fave attractions at #Disneyland? Find my must visit rides here @nicole_salama “]

Personally, I was really impressed by the Redwood Creek Challenge. It’s a set of wilderness challenges based on the movie Up. The kids have the opportunity to rock climb and zip-line as well as solve mini puzzles. At the end they get a pass book with stamps and a Jr Wilderness Explorer sticker.

R had never zip-lined or rock climbed before and having the opportunity to do both in a safe and supervised environment on equipment that was the perfect size for him was great. He was so proud of himself when he finished the rock climbing!

R also had a ton of fun walking around the park meeting different characters from Red the Firetruck to Flick the ant from A Bug’s Life. 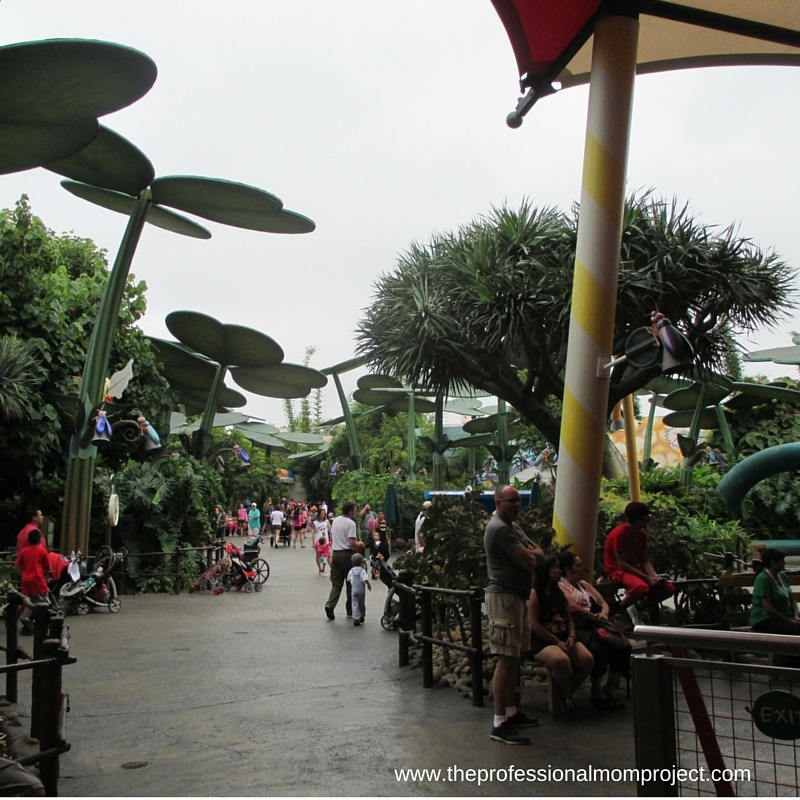 That night we had dinner at Flo’s V8 Cafe in Radiator Springs. It was a great experience for R since he was so familiar with the setting from the first Cars movie. The food was ok. R was fine, but Disneyland should increase the number of vegetarian options available for those of us who may not want to eat burgers and fries every night. 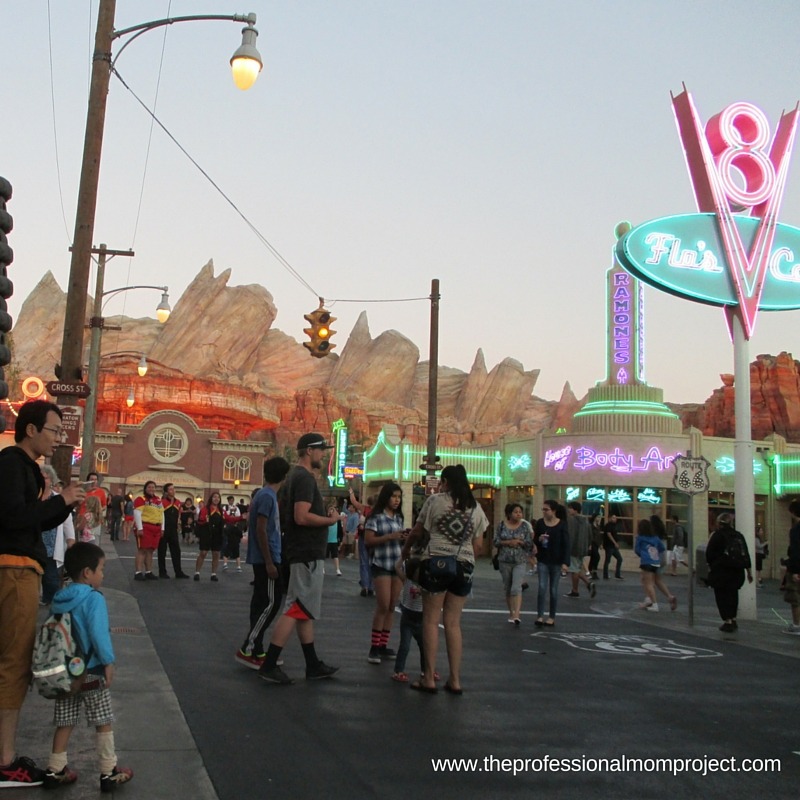 After dinner we walked around and waited for sunset when all of the neon lights light up (just like in the movie). Once they light up the buildings, there’s a party with performers, dancing, characters etc and it’s lots of fun.

After the party we went to the World of Colour fireworks at Paradise Pier. We picked up a Fastpass beforehand so we’d be sure to get a spot. We spent a while waiting for the show to start and the fireworks were amazing. 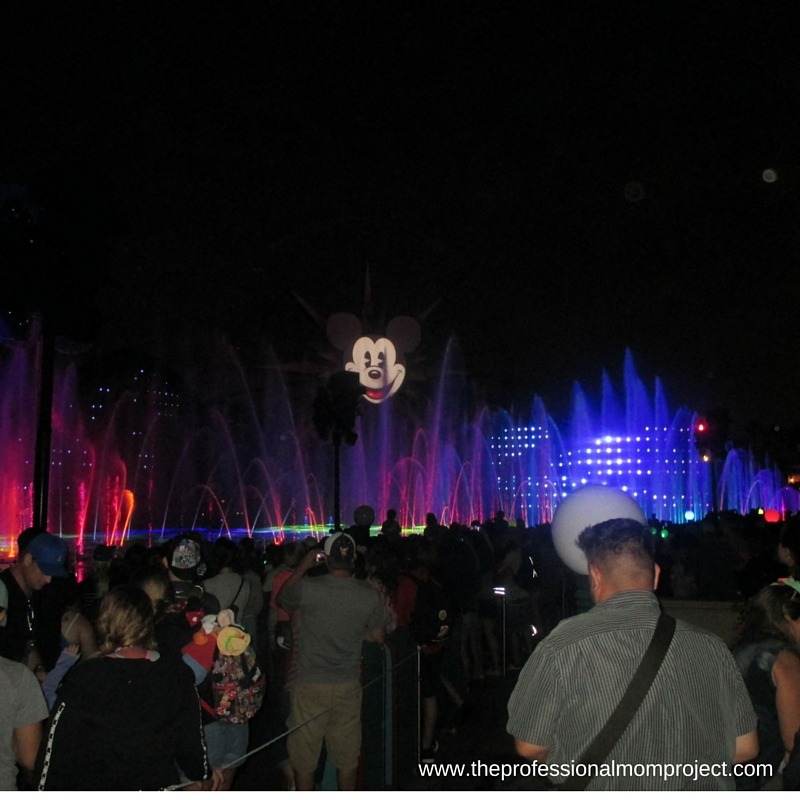 The show is very loud and if your child is sensitive to noise you may want to bring noise cancelling headphones. R was bothered by how loud it was so we left before the end.

We made our way out of California Adventure, caught our ART bus and went back to the hotel ready for a good night’s sleep.

Disneyland During the Day 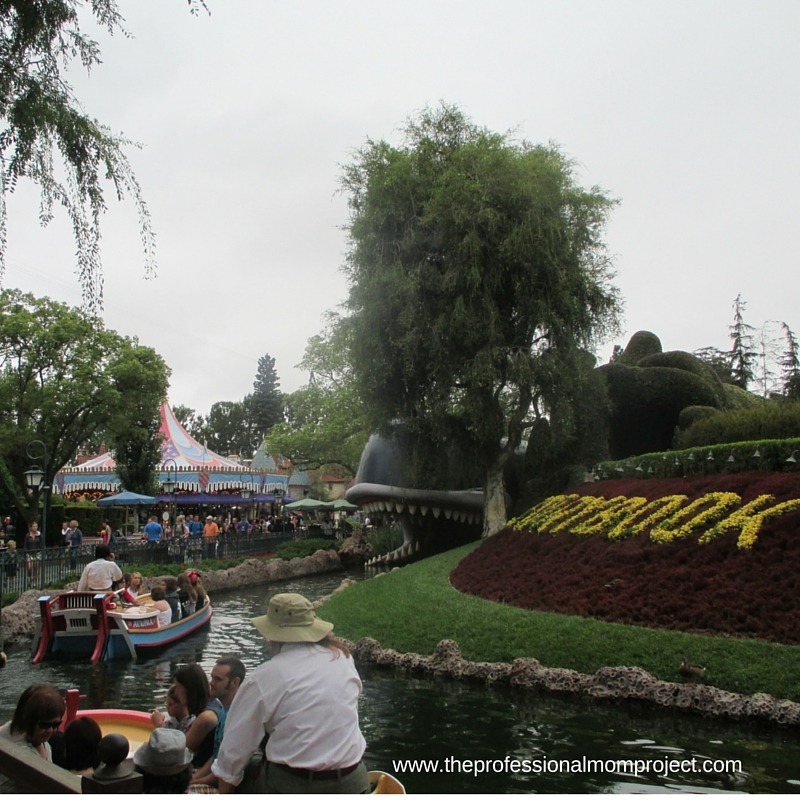 The next day we went to Disneyland. Since R had a few meltdowns at California Adventure, we decided to bring the stroller. Despite the fact that he plays every sport and runs around the entire day, I think between the excitement, waiting in line and walking everywhere he was zonked.

While bringing the stroller was a schlep for us, it was a better option than dealing with meltdowns at the happiest place on earth. Plus, it offered some excellent storage space for all of the stuff we had to carry around.

E and I enjoy the occasional roller coaster but we weren’t sure if R would like them. We took him on Big Thunder Mountain Railroad and Splash Mountain. Much to our surprise, R had an awesome time on both roller coasters. He wasn’t scared at all and laughed the entire way. It’s amazing, sometimes kids can really surprise you.

He also adored the monorail. I think he would have been happy if we’d just gone around the park on the monorail several times. He loved looking at all of the rides from above and seeing all of the people. 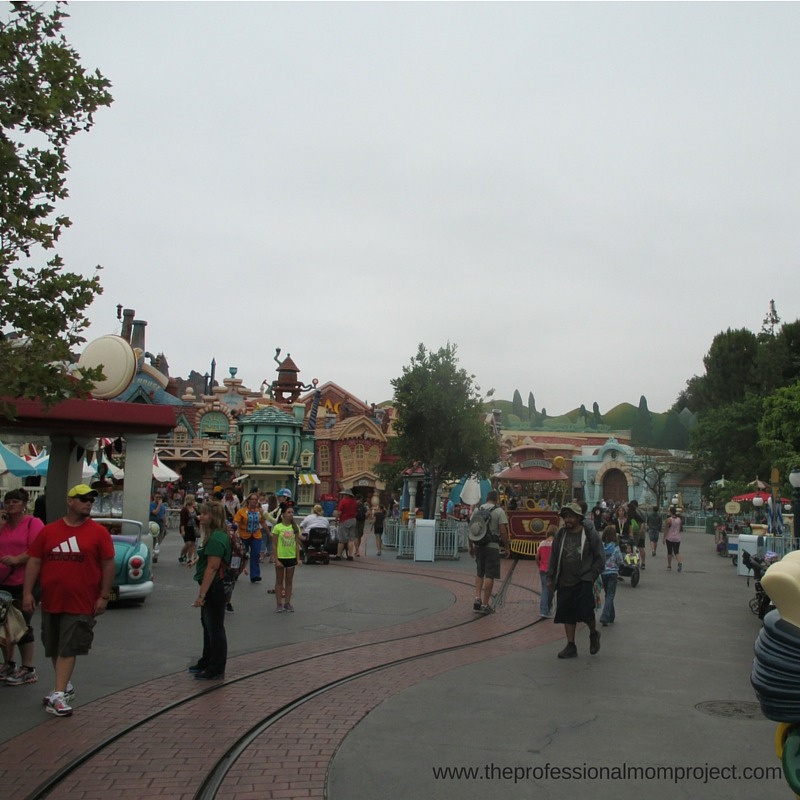 Toontown was awesome because R got to visit Mickey in his Mickey Mouse house. As we expected, the lineup was very long to meet the big mouse but we waited and R met Mickey with a big smile on his face.

As we were walking around mid afternoon our munchkin fell asleep in the stroller. We knew we made the right choice bringing the stroller along and thank goodness we did.  R was so tired that he slept for two hours in the middle of all of the noise and activity of Disney. We decided to stay at the park and walk around with him so that he’d keep sleeping and have a good rest. Had we gone on the ART we would have woken him up and he likely wouldn’t have gone back to sleep.

Later that afternoon we took it easy going on some smaller rides and watched the Mickey and the Magical Map show.

Disney knows kids. They have such a variety of things to see and do there’s something for everyone no matter how they are feeling. If you’re tired you see a show, if you have energy you go on Space Mountain…

After a very full day we went to the Carnation Cafe on Main Street USA for dinner. It was simple and did the trick.

That night we watched the Paint the Night Parade. It is a truly fantastic show. Between the music, special effects and the colorful lights everywhere it was a very memorable experience for all of us. I hope Disney keeps this attraction around even after the Diamond Jubilee. 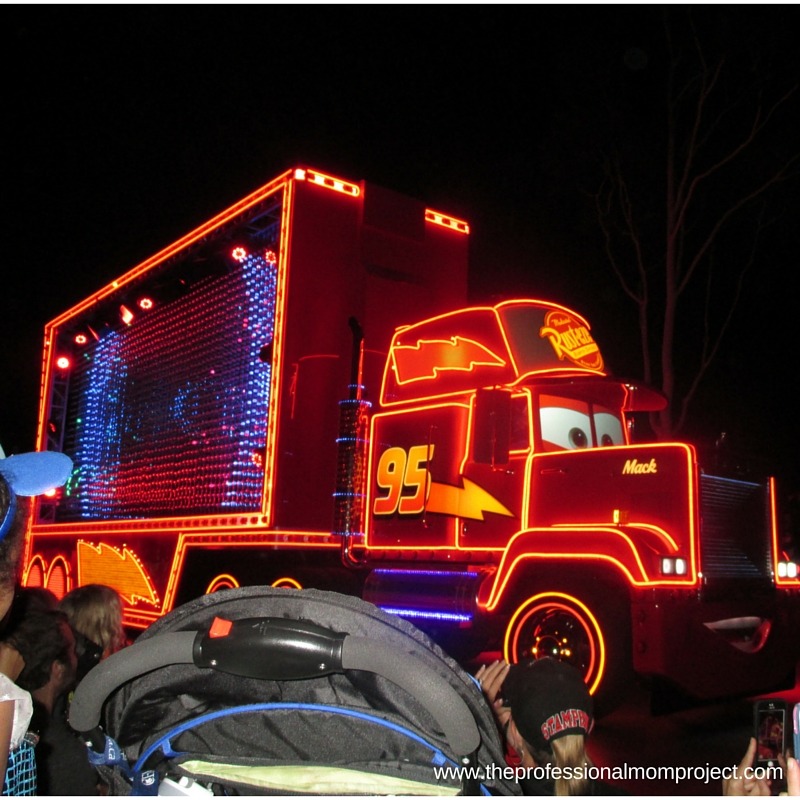 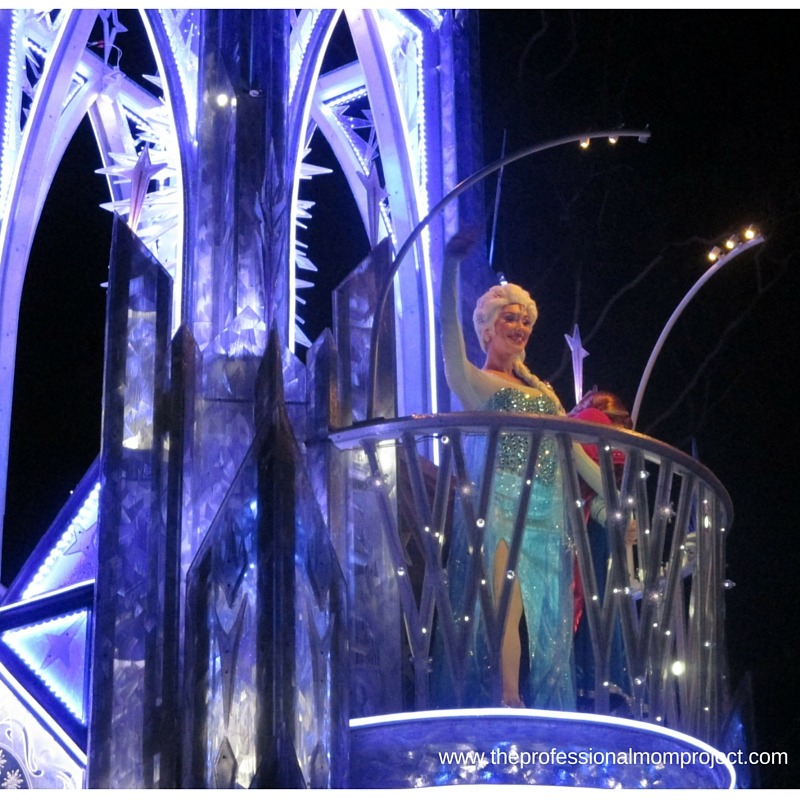 We had a great time at Disney and are looking forward to going to DisneyWorld sometime soon or heading back to Disneyland!

Here are our quick tips for visiting Disneyland:

What are your favorite tips for visiting Disneyland?