Twitter can be lots of fun or super overwhelming. I initially started on Twitter a few years ago when I was home with R. It was a quick way to get news, celebrity updates and keep up with different topics of interest to me. I also found Twitter helpful when I was looking for a job a couple of years ago.

In my current position, I promote different programs to undergraduate students. Twitter happened to be one of the most effective ways to get the word out. From there, my own Twitter following began to grow and now I have over 8,000 followers.

I know that’s nothing in comparison to some of the super Twitter personalities out there but I’m amazed that over 8,000 people are interested in what I’ve got to say. I feel that if people are going to listen to me, then I have to help them and give them meaningful and useful content.

In using Twitter for work, blogging and personal reasons, I’ve learned a fair bit about the platform and have come up with a few Twitter tips for beginners. 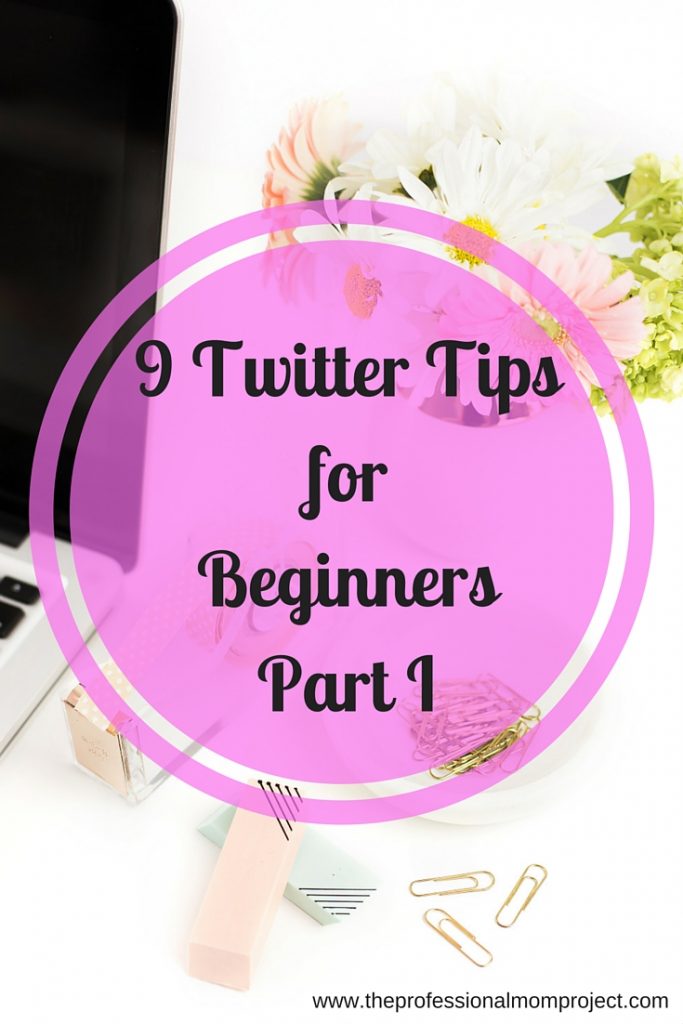 Let’s start from the beginning:

Twitter describes itself as “an online social networking service that enables users to send and read short 140 character tweets”.

According to Twitter, there are over 320,000,000 monthly active users on Twitter (whoa that’s a lot of people).

Celebrities, politicians, CEOs, college students, stay at home moms and everyone in between are on Twitter and most of us have it hooked up to our smartphones.

If you’re not already on Twitter, then you should be. It can be a great platform to keep up with friends, stay current with the news and promote your work.

What’s with all of the acronyms?

Since you only have a small amount of space to express yourself, people use a number of short forms. The most important ones are:

If the original tweet is from me and reads: “Look how much I love my mom! Check out these great gifts: https://theprofessionalmomproject.com/gifts”

You might change it and write: “Great gift choices for mom MT @nicole_salama https://theprofessionalmomproject.com/gifts”

But no one’s following me. What do I do?

1. Start following lots of people to get the lay of the land

Depending on your reason for entering the twitosphere your strategy will be different.

If you’re hanging out for personal reasons and to keep up with friends, then go to the search box on the top right hand corner and search for your friends. If they have Twitter accounts, those accounts will show up and you can follow them. I’m pretty sure your friends will follow you back 😉

Also, follow different organizations that interest you – news, fashion, diet, health – everyone is on Twitter and they all provide helpful bite sized tips.

If you’re building a business, then I’d suggest finding out who the leaders in your sphere are and following those people. They likely won’t follow you back at the start, but following these experts is a great way to learn.

You can also look at who else follows the business leaders you are interested in and follow some of those individuals. If you have similar interests and you provide helpful information, it’s likely that those individuals, who are also starting out, will follow you back and you can grow your following together.

Crowdfire is one of my favourite apps. You can link up your Twitter profile and it will tell you:

You can also use the app to find out who near you is on Twitter, which might be useful if you have a local business you are looking to promote.

If there’s an influencer that targets your key audience, you can also type in that account name under the “copy followers” button on the app and find out who follows that influencer. Once you find out which accounts follow that particular individual, you can follow them as well.

Personally, I’m a bit addicted to the finding out who has recently “unfollowed” me. By getting this info in a quick and easy way, I can decide if I want to keep following that account or delete it from my feed. It feels a bit sneaky, but since there are so many people out there who follow you just to get the follow back and then stop following you once you follow them, it’s worth keeping track of. Personally, I don’t get that strategy – especially if the person is in your area why not just follow back?

All of these features are free up to 5000 followers which is fantastic if you’re blogging on a budget.

3. RT and MT tweets by people you want to connect with

I find it super flattering when people take the time to RT or MT one of my blog posts or tweets. After someone does this I usually send a quick reply tweet to thank that person and check out his or her profile. If the person’s interests are similar to mine then I’ll follow that person.

I’ve found this technique particularly useful to connect with other bloggers. Not only do you tweet out some interesting articles, the person who you re-tweet or mention gets notified and that’s a great way to get on someone’s radar.

This isn’t something you necessarily want to do a million times if you’re not getting the response you’re hoping for but it’s worth a try.

I hope you found this post helpful, Part 2 is up! You should check it out for more helpful tips and tricks.